I have to admit that I’ve never been a big Fred MacMurray fan when it comes to serious acting. When I watch “The Caine Mutiny,” I can’t help but see the dad from “My Three Sons,” or the “Flubber” guy.

“Double Indemnity” showed me just how good an actor he really was. Raymond Chandler wrote much of the dialogue, and MacMurray delivers each line perfectly. Check out this rapid-fire exchange between doomed insurance salesman Walter Neff (MacMurray) and putative black widow Phyllis Dietrichson (Barbara Stanwyck, at her sharpest):

Phyllis: Mr. Neff, why don’t you drop by tomorrow evening about eight-thirty. He’ll be in then. 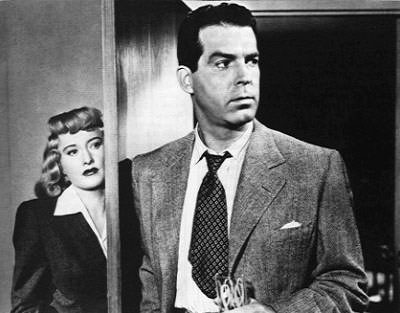 “Double Indemnity” is one of the best examples of film noir, where nobody is good, and everybody smokes. Basically, Mrs. Dietrichson wants to get an accident insurance policy on her husband. Her husband doesn’t want it. A policy is forged, and–SACRE BLEU–Mr Dietrichson is killed a couple weeks later, killed in such a way that the policy’s double indemnity kicks in, and the payoff doubles. It’s almost like someone familiar with the insurance business choreographed the entire thing. Hmm…I wonder.

I especially love how the story is presented. MacMurray stumbles into his insurance company’s empty office one night, sits down at the claims adjuster’s desk (Edward G Robinson shines as the claims guru and Neff’s friend), and begins dictating a memo, his confession. He’s bleeding from a left shoulder wound, and he deteriorates as his narrative unfolds. He’ll describe something, and then we flash back to it. Then back to him dictating, then another flashback. In essence, the action starts and ends in 107 minutes, but the flashbacks cover a few weeks.

Raymond Chandler and director Billy Wilder wrote the screenplay, and it is as splendid in its brilliance as was the hatred between the two men. I don’t care whether they were lovers or Hamilton and Burr: this one-off collaboration is an absolute gem.

This is one of the best mysteries, and the best films noir, ever made. Beyond that, it’s a beautiful piece of filmmaking.

Grade: A
(Note: if you’ve ever seen the excellent “Body Heat” with William Hurt & Kathleen Turner, you’ll see a lot of that film in “Double Indemnity,” just without nudity and color film. It’s as if Billy Wilder somehow copied a movie 40 years before it happened. “Body Heat” is another Grade A noir thriller)