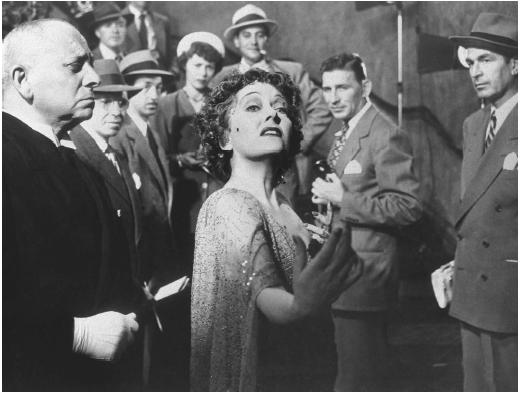 This film is among the most celebrated American films ever made, with Gloria Swanson’s famous lines “I AM big. It’s the pictures that got small,” and “I’m ready for my close-up, Mr. DeMille.”  It was in the first batch of films selected for the National Film Registry. IMDB.com users have given it an 8.7/10 rating, good for #32 in their Top 250. Roger Ebert selected “Sunset Boulevard” as one of his “Great Movies,”‘ way back in 1999.  “Sunset Boulevard” won 3 Oscars out of 11 nominations (Amazingly, Gloria Swanson didn’t win the Oscar for Best Actress (she and Bette Davis’ performance in “All About Eve” split the “psycho-nutball-bitch-aging-actress” vote)). Swanson won Best Actress from the Golden Globes and the National Board of review. So this movie is just so damned famous why bother reviewing it?

Because–for some unknown, unfathomable, and just stupid reason–I HAD NEVER SEEN IT BEFORE!!

“Sunset Boulevard” starts out being narrated by a dead guy in a swimming pool. As he begins narrating the story, we follow a so-far-down-on-his-luck-that-his-luck-is-not-even-on-earth-anymore screenwriter named Joe Gillis (William Holden). Joe’s late on his rent. He is distracted from writing one day by persistent knocking at his door. It turns out to be finance company goons sent to repossess his car.

Joe calls around, trying to raise some money from his friends. Nothing doing. He’s driving one night, when wouldn’t you know it, the goons from the repo company are coming the opposite way on the road. They notice him; a chase ensues, and Joe’s front-left tire blows out. He pulls up an abandoned driveway, and finds an abandoned garage just perfect for hiding his car. Since the mansion is deserted, he could find a place to hide out himself.

It doesn’t take Joe long to realize that Norma passed the exit for Whackoville several hundred miles ago, but he grows to understand his place in the demented play, and to enjoy the perqs. Then Joe meets an earnest, fresh-faced, and talented 22 year-old woman in Paramount’s “Reading Department.” Her name is Betty (Nancy Olson), and she finds one of Joe’s old manuscripts that she wants to develop. Joe starts sneaking out every night after Norma goes to bed, and he and Betty write together.

While all this is going on, Norma is plotting her big comeback. She’s written a treatment of “Salome” that she will star in, of course. Joe reads her script, and sees how horrible it is, and that it’s six-times too long, which doesn’t stop Norma from sending it to her old friend, Cecil B DeMille.

One day, somebody from Paramount calls. Norma is indignant: she will NOT speak to an assistant. The same assistant called again, only to be re-rebuffed.

So, Norma, Max, & Joe head to Paramount to visit Cecil B DeMille.

DeMille receives his old friend tenderly, and doesn’t want to hurt her feelings. While people are flocking to see Norma again, CBDM makes a quiet phonecall to the aide who’s been calling Norma’s house. Turns out, they wanted to rent her rare old car. Not to make a picture.

Joe and Betty fall in love, but Joe does the noble thing, and sends her away.

The climax is pretty widely known (it explains how the dead guy in the pool became dead), and the scene of Norma Desmond, starring in her comeback film–a newsreel about a crazy murderous actress–is just chilling.

This is another awesome Billy Wilder film–he directed and co-wrote the script–and another film noir, with dark deeds most foul, and lots of chiaroscuro and creative lighting. It is also an indictment of Hollywood by Hollywood. Someone asks Joe if he writes “thinking” films, and he replies “The last one I wrote was about Okies in the dust bowl. You’d never know, because when it reached the screen, the whole thing played on a torpedo boat.”

“Sunset Boulevard” really is a sort of horror film. You never feel comfortable. And Erich von Stroheim lurking around in the shadows would freak anyone out (von Stroheim really was a legendary director in early Hollywood, helming several films with Gloria Swanson).

Swanson and Holden were not Billy Wilder’s first choices for “Sunset Boulevard.” Just imagine how much odder the film would have been starring Mae West and Montgomery Clift.

Maybe the Afterworld Multiplex will show the Mae West-Monty Clift version. It would be worth watching, I’m sure.

For now, though, I’ll just agree that the movie gods got this one right.

(note: I bought this at Wal-Mart for $7.95, but it is a special, two-disc set. There are a number of really, legitimately interesting documentaries on disc two. It’s not one of those lame-o two disc things. If you’re a fan of the film, or you’d like to see it, I recommend this deluxe, two-DVD set.)