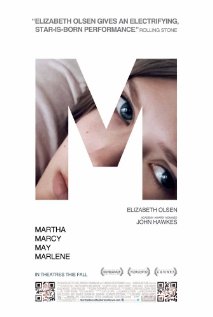 “Martha Marcy May Marlene” was one of those indie darling pics, like something that Parker Posey would have done a decade ago. It’s also an amazingly interesting picture, with a dreadful title.

A girl named Martha ends up stumbling into one of those weird rural communes. It’s not apocalyptic and religious–like the Branch Davidians–but it has its little quirks. The commune’s leader is named Patrick (John Hawkes), all sinew and a long thin nose. He spouts pseudo-philosophical platitudes, and has sex with all of the women. The women share clothes and beds, and can only eat dinner after the men are finished.

So Martha (Elizabeth Olsen) ends up there, and Patrick renames her “Marcy May.” Like the other women, she plays this subservient role, until she witnesses something truly disturbing. The next morning, she packs her backpack and sneaks away from the commune. Everybody chases after her, but she gets away. She finds a small-town diner, where she devours  a breakfast. One of the men from the commune finds her. He makes sure she’s aware of what she’s leaving, then agrees to let her go. Martha/Marcy May finds a payphone, and calls her yuppie sister, Lucy (Sarah Paulson). Lucy is newly married to her English husband, Ted (Claire Danes’ English husband, Hugh Dancy). Ted is a real estate developer in New York City, but the couple are spending time at their lake house in upstate New York, trying to get pregnant.

So Marcy May is back to Martha, and there’s a period of adjustment. The first time Martha goes swimming in the lake, she just peels off her shorts and t-shirt and jumps in.  At one point, Ted and Lucy are having sex, and Martha comes in and climbs into bed with them.  She’s not being perverted–she’s just having trouble sleeping alone, and this behavior was perfectly normal at the commune.

Oddly enough, the longer Martha is in this “normal” environment, the worse she becomes. She can’t discern the difference between her current, safe reality, and her tormented past in the commune. Ted and Lucy throw a party for their friends, and Martha is dressed beautifully. She approaches the bartender, and asks his name. He says Michael, and he offers her a drink. Well she freaks, thinking it’s one of the men from the commune. She has a genuine paranoid attack, and Ted and Lucy drag her into the house, trying to calm her down, giving her a Valium or Ativan or something.

There are other episodes, including a couple times where Martha/Marcy May calls the commune, hoping to speak to her friend Zoe (Louisa Krause). All the women when they answer the phone use “Jane” as their names. All wayward commune members are called “Marlene.”

The film cuts effortlessly between the “escaped” Martha world, and the “Marcy May” world of the commune. Elizabeth Olsen gives one of the best performances I’ve seen from a young actress in years. There’s a family resemblance between her and the kabillionaire twins, but Elizabeth has curves, and a huge talent.  She should have a long and splendid career. I mean, seriously: she’s amazing.

Ted and Lucy do a great job as the family who wants to help, but they don’t know quite what to do. They do their best to love MMMM and be patient with her, but there are limits.

The other character who stood out was Patrick, the commune leader. He was so calm and full of love…just barely hiding a facade of absolute madness. Great performance.

Still, it’s Elizabeth Olsen who is the center of the film, the hub around which everything else revolves. She absolutely nails it. 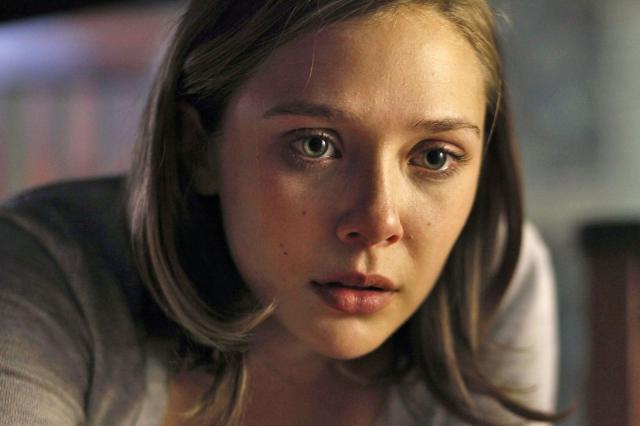 “Martha Marcy May Marlene” sort of reminded me of “Hard Candy,” just for tone and excellent performances by talented young actresses (Ellen Page in “Candy”).

This is an Indie film, but it’s not one of those where “normal” movie watchers would be lost. Honestly, I think it might have done better at the box office if it had a different title. It’s too late to fix that now, but definitely time to watch an intriguing psychological thriller with spectacular acting (portmanteau: Spectacting?)