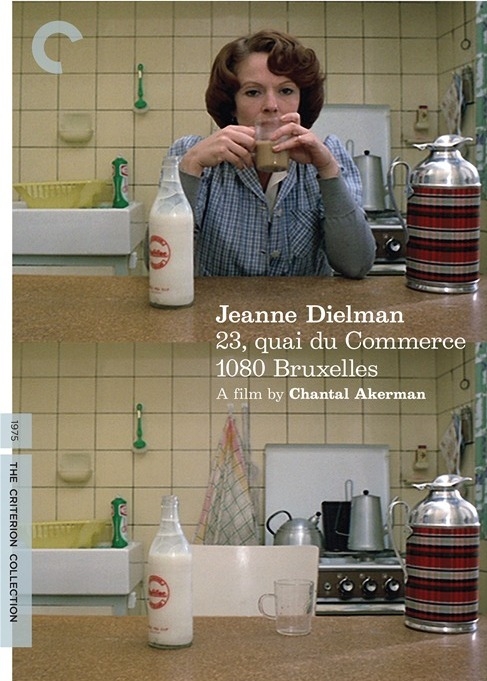 Still life with and without Jeanne Dielman, in a kitchen cleaner than most operating rooms

If you’d asked me a week ago whether I’d be working my way through Chantal Akerman’s films, I’d probably have laughed and asked, “Chantal Akerman? Who’s that?”

This has been a rewarding journey, and this film is widely considered to be Ms. Akerman’s masterpiece.

First things first: Let’s agree that “Jeanne Dielman, 23, Quai Du Commerce, 1080 Bruxelles” is one of the more cumbersome film titles ever. When I buy the Criterion DVD, I will store it between “Juno” and “Up,” just to balance things out.

This film is utterly amazing. Jeanne Dielman (Delphine Seyrig) is a fortyish widow, a single mother to a teenage son, Sylvain (Jan Decorte). She is one of the most regimented people ever. When she walks into a room, she turns on the light. She walks out, she turns off the light and closes the door. Watching her cook dinner stunned me: she’d wash spoons after she used them to stir something. Then take the spoon back out to stir again.

Jeanne and Sylvain don’t talk very much. Every night, she ends up cajoling him not to read while he eats. It’s always the same book, and he always puts it down the same way. They have a routine for after dinner, too. They listen to classical music on the radio for a period while Sylvain does his homework or reads, and Jeanne knits. (You can bet her stitches are all perfect) There’s the routine where they move the easy chairs to the edge of the living-room, then move the coffee table, then fold out the sofa into Sylvain’s bed. Every morning, Jeanne awakes before her alarm, puts on water for coffee, sets out Sylvain’s clothes for the day, takes Sylvain’s shoes and shines them. Every morning. After he leaves for school, she carefully folds his pajamas, and places them beneath his pillow, before refolding the bed into a sofa.

She wears a spotless housecoat during her morning routines. She comes into her bedroom, makes her bed neatly, and spreads a white towel across the duvet. This is because that afternoon, a man will come and she will have sex with him for money.

One thing I loved about “Jeanne Dielman, 23, Quai Du Commerce, 1080 Bruxelles” is the lack of close-ups, a frequent Chantal Akerman technique. For example, during the morning breakfast routine, the camera is set up in the adjoining room, just outside the kitchen. We can see Jeanne move from pantry to cabinet to stove back to pantry back to stove back to cabinet to table back to stove…you get the picture.

The effect is that of gazing at a beautiful Rembrandt still-life, just with one not-so-still entity moving about. (I’d say with military precision, but no boot-camp barracks is that neat)

Also, it keeps us somewhat distant from  the characters. We’re seeing whole rooms, as if peering through a window, watching people interact. Or not interact, as the case may be.

So…back to the prostitution and neatnik elements of Jeanne. On the first day, when she and her gentleman caller emerge–very neatly dressed–from her bedroom, she hands him his coat, scarf, and hat by the door. He pays her, and confirms their rendezvous for the same time and day next week.

The next shot is of Jeanne, crouching naked in the bathtub. She uses a bath mitt to soap and scrub every bit of her body, arms, breasts, legs, “down there,” even her ears, washing everything twice. The next shot is of her in nylons and a skirt, with just her slip top, scrubbing the bathtub with Ajax.

What happens over the three days we spend with Jeanne is that she loses it. We see little clues, like on day two, she missed a button on her housecoat. Then it escalates. Her routine, normally so precise and predictable–begins to break down, just as she begins to break down. I mentioned the still-life painting above. We see some true still-lifes as Jeanne begins to implode. She’ll sit at the kitchen table and stare off into space. Night two, she can’t focus enough to write a letter or even knit. Something happens during her trick the third day we spend with her, and she ends up at the dining room table. Her gaze is unfocused; she doesn’t move, except that we can see her deflating as a person. What Ms. Seyrig did, the way she showed so much inner turmoil with so little movement or expression, is nothing short of genius. Just brilliant acting.

Jeanne doesn’t really smile. Nor does she frown or cry or laugh. She’s almost an automaton, especially on the first day. Her expression is pleasant, and she’s not quite Stepfordian, but she shows almost no emotion, even with her son. When she reads him a letter from her sister, she does so in a fast monotone. She shows so little spark.

The film covers three days with Jeanne Dielman, and she transforms during those three days. Her expression doesn’t change, nor does she become a screaming harpy. But certain things violate her sense of order. When she stops for an afternoon coffee, an old lady occupies Jeanne’s usual booth, plus her usual waitress, Gisele, has already left for the day. One of her regular stores opens a little late. She gets to the butcher shop, and finds she doesn’t have a bag to carry her purchases. A big deal? Of course not. The shopkeeper just puts her ground beef into a bag, and sends her on her way. This is a subtle clue, though: Jeanne Dielman always has a bag.

“Jeanne Dielman, 23, Quai Du Commerce, 1080 Bruxelles” clocks in at 201 minutes (sic: three hours, 21 minutes). Oddly, I found myself so completely engrossed, that the length didn’t bother me at all. The pacing was slow and deliberate, but it never dragged.

Maybe I connected with this film so completely, because I just went through something like this. I didn’t over-squish meatloaf, but I imploded; I found myself sitting and staring into the Abyss.

Jeanne Dielman stared into the same Abyss I did, an eternity of nothingness and suckage contrapuntal.

And sadly, nobody seems to notice except for us.

If you love film, take a chance on this 201 minute Belgian masterwork. I can’t recommend “Jeanne Dielman, 23, Quai Du Commerce, 1080 Bruxelles” enough. The only thing I might change is the title.

(note: I saw this and the other two Chantal Akerman films I’ve reviewed on Hulu Plus. I’m not a paid endorser or anything, but they have an entire section devoted to The Criterion Collection, one of the most-extensive lines of  what the kids today call “art-house films.” Here, you can find under-known niche geniuses like Chantal Akerman, as well as  Ingmar Bergman, Kurosawa (sp?), and dozens of other directors you’ll never find in RedBox.)

B.A. in Literature, Minor in Film Theory and Criticism, thus meaning all I’m trained is to write blog posts here. Neptune is my favorite planet–it vents methane into the solar system like my brother does. I think Chicken McNuggets look like Pennsylvania, Illinois, and Indiana. There are times when I’m medicated, which is why I wrote about McNuggets. Buy some today and tell me I’m wrong! Anyway, Beyond that: mammal, Floridian, biped.Good Night, and Good Luck. Besos, tom
View all posts by tom →
This entry was posted in Films, Films 2012, Foreign and tagged all movies big and small. Bookmark the permalink.