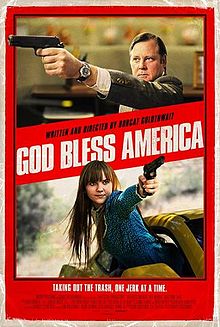 The tagline is classic: Taking out the trash. One jerk at a time.

I am so tired of election ads, that I just want to bash something. Hearing the half-truths, the carefully parsed language–really, Romney people? “Tax breaks for job providers?” Aren’t they also known as “big corporations”??

Seriously, it’s enough to make me want to “sharkstooth a bitch,” as Christina would say.

“God Bless America” is the story of a man who does just that, only not with shark dentition.

Frank (Joel Murray (another of Bill Murray’s talented brothers)) lives a duplex next to neighbors from hell. They play their tv too loud; they have an incessantly crying baby, fight all the time, and invariably box-in Frank’s car when they parallel park.

One day, Frank gets fired from his job (he sent flowers to a sad coworker, and was fired for sexual harassment ), and told by his doctor that he has a huge, inoperable brain tumor. He decides to kill himself. While he’s sitting there with the gun barrel in his mouth, he sees one of those MTV-type “sweet 16” shows, whereupon a rich girl is screaming at her parents for buying her a brand new Lexus instead of the Escalade she’d wanted.

Frank decides that if he’s shuffling off this mortal coil, he’s going to shuffle off her mortal coil as well. While he’s doing recon in the woods, a teenaged girl named Roxy (Tara Lynne Barr) figures out what he’s doing. Once he’s actually accomplished his task–plan A didn’t work, but plan B did–Roxy hops into the car to join him. On the road, they discuss different groups of people who should be killed (“people who high-five,” e.g., or “People who say `The Man’.”

They leave some bodies in their path. Sometimes, it backfires. They kill a horrible asshole on a right-wing TV network, and he becomes a martyr.

The same thing happened in “Heathers.” In fact, many ideas and leitmotifs in “God Bless America” are similar to other films: Heathers, Badlands, Network, Talk Radio, Falling Down, Natural Born Killers, Mulan, etc.

One ongoing backdrop is a “talent” show called “American Superstarz” (obviously “American Idol” in “you can’t sue us” disguise). On the night before Frank loses his job, this verrrrry slow-witted, tin-eared kid named Stephen goes out and sings “Theme from Mahogany”. It’s terrible. Beyond terrible. Words cannot describe how terrible this kid’s singing was. Have you ever smelled the stuff that comes out of a sebaceous cyst when you pop it? This kid’s singing stunk worse than that.

So of course, he becomes a phenomenon, one people mock around the watercooler at Frank’s office.

Frank’s quarrel with the world is that it’s just so mean, so cruel. He just wants to kill the people who are meanest. That seems a bit ironic.

The best thing about “God Bless America” is the chemistry between Frank and Roxy. She’s fearless and brash, and lets it be known she’d entertain the idea of adding “Benefits” to their friendship. He refuses. In fact, he won’t touch her or allow her to touch him until he finally breaks down and lets her try acupressure to relieve his headaches. (He’s shocked when it works)

Of course, they split, then inevitably reunite prior to the climax.

“God Bless America” is not a great film, but it speaks for a lot of people who are just sick of the hate-mongering. The film skewers bad morning-drive radio, viral YouTube videos, TMZ, Westboro Baptist Church, and this whole culture where people become celebrities just for being reprehensible (Snooki, Kardashians, etc).

“God Bless America” was written and directed by Bobcat Goldthwaite, who does a good job. He’s not trying to remake Citizen Kane, and he knows it. He trusts his actors and his instincts, and both serve him well. I really enjoyed this film a great deal more than I’d thought I would. There’s violence and plenty of spewed hatred, but Frank has a heart. When he and Roxy shoot the moviegoers who made noise and talked on their phones, ruining the feature for the duo, Frank stops and thanks one lady for not speaking during the film, or talking on the phone, or being in any other way rude. She says, “You’re welcome,” and she emerges unscathed.

Again, there are a number of derivative points in “God Bless America”. This would normally bother me more than it did in this film. Watch “Triumph of the Will,” Leni Riefenstahl’s film account of Hitler’s 1934 Nuremberg Nazi Party rally. Then watch any piece of film JFK’s press apparatus released before and during his campaign and administration. Since  JFK, everyone else has caught on as well: the angles, the edits, etc–“hey, this kraut Riefenstahl lady has invented film propaganda, and it got that Hitler fella some power, right? Let’s use it on our guy.”

Also, I think the derivative points appealed to me for the simple reason that I’ve seen those movies, and I get so damn pissed at society’s idiocy that I feel like running amok. About sharkstoothing  a bitch, or running over roadside hatemongers with “God Hates Fags” signs. On occasion, those films’ scenarios pop into my head intact. There are so many ways people stumble upon to become momentarily famous, and pitifully small selection of ways to rid the planet of them.

I live in a swing state with a lot of electoral votes; I live on the “I-4 Corridor,” which is where the Josh Lyman’s and Sam Seaborns figure Florida will be won or lost. The Republican National Convention is here. I’m tired of them all.
Not homicidally so…not yet, anyway.

I am blessed to have a good cat, a brand new bed, a shitload of Xanax. and a lovely balcony, from which I can bellow to the mallards, “I’m as tired as hell, and I’m not going to take this anymore!!”