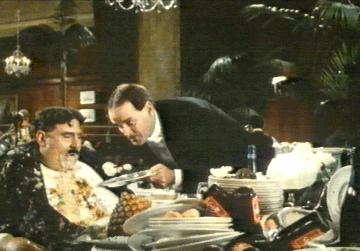 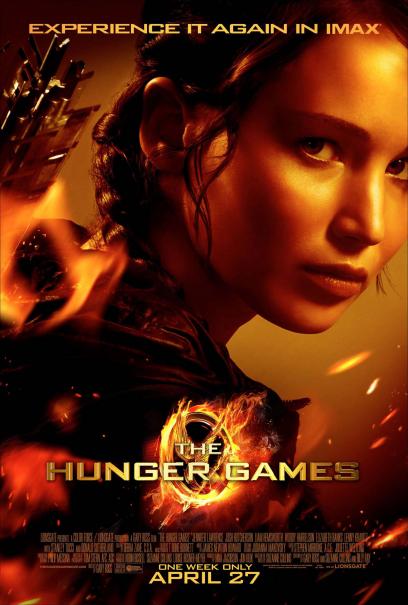 *- At its core, “The Hunger Games” is about people using what they have to survive, to make the best of their situations, no matter how bleak and foreboding, how hungry they are, or how they have a giant golf-ball-sized crater in their backs.

(This is an odd one. Get a beverage and prop up your feet.)

*- A real life example: a Hagrid-sized misanthrope notices a bump on his back a week ago. He slathers it every day and night with enough Neosporin to fill a small pond, yet after a week, it’s still there. Grown, in fact, and red. So, he…oh, who are we kidding, I ended up going to my doctor. (I have kind of a thing about infections, believe it or not 😉 ) My doctor said something to the effect of, “EEK! We must drain this immediately, or you’ll end up in the hospital this weekend.”

*- “NO,” I cried. “I will NOT go to the hospital with an infection this weekend! Fie. Fie on the damned hospital! Prithee, Dr M. I beg of thee, work thy magic. Defy these hellish portents, and spare me such a dreadful future!”

*- So, my doctor and his nurse stabbed me in the back with a syringe full of a  “numbing agent,” which seemed to have as much effect as simple tap water, numbing-wise.

*- Now that my back was just as sensitive as it was before being stabbed, the doctor proceeded to cut. And cut.

*- The incision was two feet long!

*- Sorry, INCHES. Two INCHES long, and it hurt like a sonofabitch.

*- The doctor then squeezed the abscess. And squeezed, and squeezed, and drained like a 5 gallon bucket of toxic death goo out of my back, as if he’d opened a spigot to hell’s septic tank.

*- Not even I could make this part up. My doctor actually said, “You know, I have to admit. Squeezing this thing? Squeezing out all this crap? It’s really very satisfying, like I’m actually doing something instead of just writing a prescription.”

*- Okay, yuck. I apologize, and I accept that this pus-draining has nothing to do with “The Hunger Games.”

*- Except for one thing: I demanded pain meds. He said something about Vicodin, and I said, “No. OXYcodone. Hydrocodone makes my heart race.” (That’s true)

*- To be honest, the abscess didn’t really hurt until he started hacking on it. To be even more honest, it felt a hell of a lot better once he drained it. But I’m too damned old to be rewarded with a lollipop, so, I left the office with a crater-sized hole in my upper right back–a hole that had been stuffed like a Christmas goose, (only with gauze) and bandaged over–and a prescription for Percocet.

*- So, tonight, I picked up some supplies for the impending nasty weather, just in case. My dinner consisted of a ham sandwich, some M&M’s, about a gallon of water, and a respectable number of Percocets.

*- It was at this point that I popped in the DVD of “The Hunger Games.” (note: I loaded the DVD into the laptop’s optical drive. I did NOT ingest the DVD, no matter how pretty it was)

*- Ham sandwiches, water, and M&M’s are all pretty consistent, and a few Percocets probably weren’t going to make me feel worse–they might actually help my lower back stop aching. As far as the film, though?  I was prepared to be disappointed.

*- I was quite happily wrong.

Like 90% of literate humans, I read “The Hunger Games” trilogy, and thoroughly enjoyed it. The story was fresh and disturbing, with some wonderfully drawn characters. Writer-Director Gary Ross did an excellent job bringing this book to the big-screen. There was some controversy. Jennifer Lawrence, who plays the heroine Katniss Everdeen, is an actual woman, with curves and boobs and things, just like real women have. Many people thought Katniss should be a stick-figure. I’ll grant that Katniss in the book spent a lot of time hunting and bartering for food, but this doesn’t mean she can’t have curves and boobs and things. Hell, in the 90’s, Kate Moss shilled for perfume reflecting the super-rich life, and she has the figure of a coffee stirrer with two ant bites.

Jennifer Lawrence was a brilliant Katniss, in my opinion. Her face is beautifully expressive–she can convey a broad palette of emotions without speaking a word.

If you don’t know the story, I’ll explain briefly: there are 12 districts. Once a year, each of them sends one young man and one young woman to participate in The Hunger Games. In The Hunger Games, the 24 tributes from all over Panem are pampered for a few days, then thrown into the “arena,” wherein they kill each other–or die from some sort of ookey “nature”–until there is one person left. The Hunger Games champion is rich, and just has to enjoy life and do publicity crap forever. In this particular Hunger Games, there’s a hitch: Peeta professes his love for Katniss. Blah-cubed, the rules are changed, so that they can both win, just because it’s better tv.

I’ll just hit  on a few observations, since I assume everyone has read the books, or at least knows what they’re about.

*-I liked the chemistry between Peeta and Katniss. The book had them faking it more. I know they weren’t really in love, but I liked how the movie didn’t obsess on this.

*- Stanley Tucci played Caesar Flickerman, the emcee/play-by-play announcer/TV host of The Hunger Games with tremendous flair. He’s good in everything, but I really liked him in this.

*- Woody Harrelson’s performance as District 12’s “mentor,” Haymitch Abernathy, was brilliant. This film was full of good performances. He easily blew everyone else away.

*- The film version of “The Hunger Games” showed us what happened behind the scenes–we got to see the game-master guy, and all the control room people, as they decided which obstacles to put where, and how to change the “arena” to crank up the action and sate the nutball viewership. The book didn’t touch this, since it was told from Katniss’s point-of-view (third-person, limited omniscient, if I recall)

*- I also remember reading of controversy surrounding the casting of Rue, the young, tiny tribute from District 11 or something. Amandla Stenberg played Rue. Ms Stenberg is Half African-American and half Danish. Some people were freaking because the book Rue was not designated as a person of color. These complaining people can just bite me. Amandla Stenberg is lovely, and was a fine Rue. Plus, her first name is A) the Zulu word for “power”; B) a lovely name, and C) the title of a really good Miles Davis cd. Yay, Rue.

*- Half-Jewish/half-African-American Lenny Kravitz played Katniss’s image consultant, Cinna. Lenny Kravitz is an awesome musician and songwriter, and he did a nice job acting in this film.

*- Holy shit, this hole in my back really itches. It could be the tape. It could be that it’s healing. Either way, I want it to stop itching. However, I can’t do anything till Tuesday. Because voices carry.

*- No, I mean because that’s when I go back to my doctor, and he unpacks the crater, and examines it to make sure it’s done producing satan-pus, and that I’m not going to die.

*- In a perfect world, I’d be able to have an orchid growing out of the crater.

*- Hell, there may be an orchid growing back there. I’m not allowed to take a shower till this is unpacked Tuesday.

*- “The Hunger Games” is one of those books that features so much detail, and so many thoughts inside the protagonist’s head, that it is difficult to do it justice in a film. Kudos to Gary Ross for his excellent, loving treatment of a book so many people love.

*- I really like Donald Sutherland (Donald Sutherland is one of the whitest people ever). In The Afterlife, I hope I’ll be given access to a special film lab, where I can go in and substitute Donald Sutherland for any actor in any film. For example, I could replace, say, Richard Widmark in “Judgment at Nuremberg” with Donald Sutherland. Or see how he would do as Louis in “Casablanca,” trading barbs with Bogie.

*- My sandwich is gone. My water has been drunk, and my M&M’s savored. The pain meds knocked out the pain in my back, and left me sufficiently comfortable to enjoy the film.

*- “The Hunger Games” is not going to change the world–either in book or in movie form. Very few films do that.

*- However, I found “The Hunger Games” to be highly entertaining. It’s not cheery or upbeat, to be sure, but it is a well done film, well acted and paced so that it never bogged down.

*- I’m far from District 12. The only district that matters to me this morning is that I live in “District A,” the Purple Zone if you’re looking at your Pinellas County Evacuation chart. Hurricane Isaac is out in the Gulf. If it gets stronger and jogs this way, mine is the first zone to be evacuated. This is reality; “The Hunger Games” is just a lovely piece of fiction.

*- How pleasant, though, that I can lie here in District A, and watch people from Districts 1 through 12 battle it out, while I enjoy a ham sandwich from the “Deli District” at my 24 hour grocery store, and augment that with a couple of pills from the “Control Class II” district of my favorite Walgreen’s.

*- It’s ever-so-lovely when people, food, entertainment, and medications can join together–regardless of race, creed, or district–and entertain the crap out of me for a few hours.

Happy Sunday from The Purple Zone.

B.A. in Literature, Minor in Film Theory and Criticism, thus meaning all I’m trained is to write blog posts here. Neptune is my favorite planet–it vents methane into the solar system like my brother does. I think Chicken McNuggets look like Pennsylvania, Illinois, and Indiana. There are times when I’m medicated, which is why I wrote about McNuggets. Buy some today and tell me I’m wrong! Anyway, Beyond that: mammal, Floridian, biped.Good Night, and Good Luck. Besos, tom
View all posts by tom →
This entry was posted in Films 2012, mental chex mix. Bookmark the permalink.