There are Reasons Noah Packed No Clothes, by Robert Jacoby (2012) 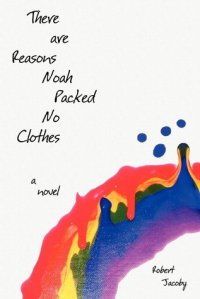 Novels tell stories. If you think of, say, the Harry Potter series, J.K. Rowling relates Harry’s adventures as he grows up. No matter how whiny and paranoid Harry is–ref: The Order of The Phoenix–Ms. Rowling’s narrative maintains the same, reliable tone.

In reading a stream-of-consciousness novel like Robert Jacoby’s brilliant “There are Reasons Noah Packed No Clothes,” we don’t so much hear a story as watch it unfold. Further, because we’re seeing it through the protagonist’s eyes, the narrative veracity can be suspect. More on this later.

“There Are Reasons Noah Packed No Clothes” follows 19-year-old Richard Issych from a hellish awakening after a failed suicide attempt through his apparent improvement in a mental institution.

And it looks like Richard is improving. In the first pages, thoughts come in staccato, nonsensical bursts. As his head clears from his attempt–he took 27 Quaaludes–his sentences become more lucid, the thoughts more complete. Once the anti-depressants kick-in, he sounds relatively normal.

There is always something off about Richard’s thinking, though. His “friendships” are essentially with people he needs (streetwise Vic, for example), or people he can’t escape (e.g.,his roommates, certain other patients who attach themselves to him). He falls in lust with a young, buxom patient named Sandy, and from their flirtation evolves a friendship of sorts, but Sandy notwithstanding, Richard insulates himself from others.

This is especially true of his psychiatrist. We can hear what Richard says, as well as what he wishes he were saying.

Where narrative reliability comes into play is that we can’t trust Richard’s interpretations. Because of his extremely serious depression, combined with the powerful meds he takes, we can never know how validly he places himself within the patient hierarchy. In his mind, he’s the sanest person there, and everyone else is obviously flawed, while the other “guests” could be thinking the same about themselves. His thoughts show a lot of unreleased resentment and anger, and he sees things at night that make us wonder whether he truly is delusional.

“Noah” has drawn comparisons to both “One Flew Over the Cuckoo’s Nest” and more recent fare like “Girl, Interrupted.” These are inevitable, since most mental institutions work the same way. There are meds, dining areas, group therapy, individual therapy, squabbles with other “guests”, group field trips, etc. There may be variations in the quality of the respective staffs and facilities, but the basic rubric is the same.

“There are Reasons Noah Packed No Clothes” will delight some readers and baffle others. The stream-of-consciousness narrative is not as impenetrable as much of James Joyce’s work, which opens “Noah” up to a broader audience, but some readers would be lost. Stylistically, it reminded me of Joyce Carol Oates’s “Zombie” (just far less serial-killery).

For those who enjoy reading something with more oomph than the typical mystery or romance novel, and who are willing to delve into a novel that challenges its readers, “Noah” will prove unforgettable.

B.A. in Literature, Minor in Film Theory and Criticism, thus meaning all I’m trained is to write blog posts here. Neptune is my favorite planet–it vents methane into the solar system like my brother does. I think Chicken McNuggets look like Pennsylvania, Illinois, and Indiana. There are times when I’m medicated, which is why I wrote about McNuggets. Buy some today and tell me I’m wrong! Anyway, Beyond that: mammal, Floridian, biped.Good Night, and Good Luck. Besos, tom
View all posts by tom →
This entry was posted in Books, Literary or Genre Fiction and tagged booksandmoviesandcrap.com, Robert Jacoby, There are Reasons Noah Packed No Clothes. Bookmark the permalink.

5 Responses to There are Reasons Noah Packed No Clothes, by Robert Jacoby (2012)