(nb: I received an advance review copy from the publisher via NetGalley) 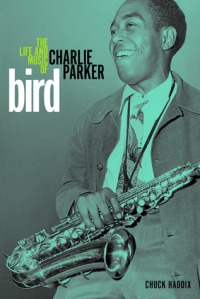 “Bird: The Life and Music of Charlie Parker” is Chuck Haddix’s faithful biography of Charlie “Bird” Parker, and I use the adjective “faithful” advisedly.

Writing about Parker poses a few traps for an author. First, you can focus solely on the man, weaving together a tapestry of his triumphs and failures as a human being: bad relationships, alcohol and drug abuse, questionable sanity, unreliability, etc. Second, you could focus solely on the music, how he and Dizzy Gillespie (with a few others) invented “be-bop,” and rode that challenging style through periods of favor and enmity.

However the worst pitfall an author could fall into is to whitewash Charlie Parker’s life and career, minimizing his faults and shouting his strengths.

Parker came out of the legendary Kansas City jazz scene, where his mania for practicing and willingness to learn from old pros shaped him into the phenom known the world over simply as “Bird.” (Haddix co-wrote “Kansas City Jazz: From Ragtime to Bebop–A History,” and his knowledge of the Jazz scene known as “Kaycee” is encyclopedic)

Young Charlie was doted on by his mother, who tolerated his misbehaviors, or at least chose to overlook them. That led to Parker feeling like he could charm his way out of practically anything.

He really could…practically: there came a limit.

As a young musician, he and his band-mates were returning from a gig at a whites-only resort. The car Parker was riding in went off the road, leaving him with severe injuries. For his pain, the doctor prescribed heroin, a drug that would plague Bird throughout his too-short life.

“Bird” follows Charlie Parker’s ascendancy from a lower-rung Kansas City club musician to being the most widely celebrated alto saxophonist in America, if not the world. When he was only half in the bag, he was brilliant. When he was clearheaded, his playing defied adjectives. He was a technical virtuoso with a photographic memory, able to make even the most complex music sound effortless.

What he and Gillespie did with bebop was create a musical language that turned its back on the straight swing and ballads of previous jazz eras, and create something so complex as to challenge even the most prodigious talents. The two were up to the task.

Bird and Dizzy had a love-hate relationship professionally. They were the Ruth and Gehrig of bebop. Parker was Babe Ruth, larger than life with huge appetites and human weaknesses, while Gillespie was Lou Gehrig: always where he was supposed to be, when he was supposed to be there, always primed and ready to play. Despite their essential co-creation of bebop, their professional relationship was strained.

Eventually, Parker strained and destroyed a lot of professional relationships, with agents, record companies, club-owners, and plenty of his fellow musicians.

He strained and destroyed plenty of personal relationships as well. His infidelities and drug abuse ended two marriages, and were taking their toll on his common-law third wife. He bled friendships dry by borrowing money he never repaid, nor even intended to repay.

Through it all, there was just something so damned special about Charlie Parker. He could be charming and kind, and generous to a fault. As a musician, he could be a consummate professional, showing up on-time and ready to play, night-after-night. As a husband and father, he could be amazingly attentive and loving.

There were two sides to Charlie Parker. He could be part-angel, yet he was constantly chased by demons.

There was also the duality of Parker as a man and a musician, and Haddix follows both carefully, and manages to combine this genius’s incredible story into a taut, very readable book less than 200 pages long (one could write thousands of pages about Charlie Parker).

“Bird: The Life and Music of Charlie Parker” is aptly named, for unlike most biographies, this book delves into the musical specifics of Bird’s genius. We meet all manner of musicians he played with, and learn some of the technical elements that made bebop bebop.

If you are completely unfamiliar with Jazz or music in general, there will be some passages that might be slightly difficult to comprehend, but those are rare. If you are a true Jazz-head (as am I), you’ll relish every detail. If you’re not, you’ll still be absorbed in this fallible immortal’s story.

“Bird: The Life and Music of Charlie Parker” does an excellent job of covering both elements of the man known as Bird: the world where his struggles were legion, and the one where he soared oh so high.

B.A. in Literature, Minor in Film Theory and Criticism, thus meaning all I’m trained is to write blog posts here. Neptune is my favorite planet–it vents methane into the solar system like my brother does. I think Chicken McNuggets look like Pennsylvania, Illinois, and Indiana. There are times when I’m medicated, which is why I wrote about McNuggets. Buy some today and tell me I’m wrong! Anyway, Beyond that: mammal, Floridian, biped.Good Night, and Good Luck. Besos, tom
View all posts by tom →
This entry was posted in Books, History, Memoir or Biography, Non Fiction and/or Commentary. Bookmark the permalink.