(nb: I received an advance copy of this book from the publisher via NetGalley) 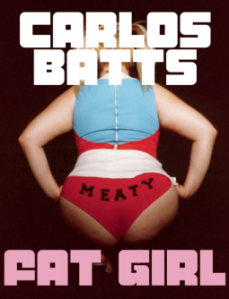 In this Case–and Many Others–Bigger is Most Definitely Better

Many, if not most, American women have struggled with their weight at some point. Sometimes, it’s simply the “Freshman Fifteen” a girl puts on her first year of college. Other times, a woman—no matter her age, from eight to eighty—will be what society deems “fat,” and it can cause incredible insecurity.

As the adages go, however, “beauty comes from within,” and “sexy is a state of mind.”

These are both true, and these are both manifested in April Flores, a woman who grew up heavy, became skinny in college, then slowly regained her weight. The difference is, she learned to put her misery behind her. She stopped allowing her weight to govern her happiness, and gradually found self-love and confidence, despite the fact that she didn’t resemble the skeletal women so often held up as ideals of beauty. April Flores wasn’t wrong. The media, the fashion industry, Hollywood—they were wrong.

In 2000, by chance (sorta), April ran into photographer Carlos Batts outside an art gallery. He asked if she’d done any modeling, and would she model for him. She put any remaining insecurity behind her, and agreed.

He asked her to model in a bikini. She had to think about it, then agreed.

For thirteen years, now, they’ve been a team—artist and muse, husband and wife. The photographs in this collection (their fourth) are beautiful. April Flores is beautiful. She has large decidedly non-perky breasts. She has some cellulite, and rolls of flesh around her middle. In this way—with these attributes—she is like many American women, who also aren’t silicone-boobed pipe-cleaner figures. Shape-wise, she looks like most of the women I’ve dated the past few years.

But her beauty doesn’t come solely from resembling other women’s body form. April Flores has undeniable sex appeal. She has a lovely face and porcelain skin, but it’s deeper than that. She has a palpable self-confidence. She wears her plus-sized body like Audrey Hepburn wore a Halston gown—beautifully and gracefully.

Carlos Batts has a beautiful photographic style. His pictures are full of vibrant color, making the always colorful April the perfect model for him. Many of these photos explore April’s sexuality. There is a good bit of nudity, mostly of her alone, but sometimes with another person. If your tastes are less prurient, this might not be the book for you.

As it happens, “Fat Girl” is an ironic title for this book. “Fat girl” is so commonly used pejoratively—“oh, so and so. You know. The FAT GIRL.”

In their book, “Fat Girl,” Carlos Batts and April Flores show that a so-called fat girl can have as much sass and sexuality as any skinny bitch out there.

Highly Recommended (With the caveat that there’s a lot of nudity and sexuality, though tastefully done)

B.A. in Literature, Minor in Film Theory and Criticism, thus meaning all I’m trained is to write blog posts here. Neptune is my favorite planet–it vents methane into the solar system like my brother does. I think Chicken McNuggets look like Pennsylvania, Illinois, and Indiana. There are times when I’m medicated, which is why I wrote about McNuggets. Buy some today and tell me I’m wrong! Anyway, Beyond that: mammal, Floridian, biped.Good Night, and Good Luck. Besos, tom
View all posts by tom →
This entry was posted in Art & Photography, Books, Non Fiction and/or Commentary. Bookmark the permalink.