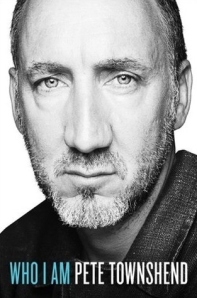 I just finished Pete Townshend’s amazing autobiography, “Who Am I,” and there is so much information, so much insight into how a great artist’s mind works, that I didn’t quite know how to start my review.

So I put on one of my favorite Who songs, “Eminence Front.” It starts out with a synthesized drumbeat, very simple. Then sequenced synthesizers come in and set up a more frenetic rhythm. Then another synth joins the first. It’s the kind of thing that shouldn’t work, but it does because it was so meticulously done. An electric piano appears, adding some melody, there are little guitar accents tossed in for good measure, then BANG, in come the drums and the main riff. Add an ace guitar solo, then—after two minutes—Pete Townshend comes in singing.

This piece serves as a perfect metaphor for Pete Townshend’s adult life. Repeatedly, he starts with a kernel of an idea, adds to it layer by layer until it becomes something transcendent.

The Who are rock legends, with the combination of Roger Daltrey’s powerhouse vocals singing Pete Townshend’s lyrics. They had several pop/rock hits in the 1960’s. Then Townshend had the idea to do a rock opera. There was the kernel. The story of the deaf, dumb, and blind pinball wizard grew in his imagination. He carefully wrote the songs, orchestrated the arrangements, and made sure his idea was complete.

That became “Tommy.” Amazing songs: “Pinball Wizard,” “We’re Not Gonna Take It,” the list goes on. It became an instant classic.

A few years later, legendary director Ken Russell wanted to make a movie of “Tommy.” Once again, Pete Townshend went to work. He threw himself into writing more orchestrations for the film, working with Russell and the producers, helping with the cast, making sure it was complete.

That became the film, “Tommy,” a cult classic.

I single out “Tommy,” because it was a huge project for Pete Townshend at every step. He spent hours in his home studios, teaching himself piano, programming synthesizers, writing new orchestrations.

During the course of the labor-intensive “Tommy” projects—which spanned decades—Townshend managed to write songs for several Who albums (including another themed project, “Quadrophenia,” which also became a film and musical). He toured relentlessly, juggled marriage and fatherhood, sobriety and abuse, maintained his spirituality, wrote and developed solo projects, worked as an editor for a major London publisher, started various businesses, wrangled with lawyers and managers, developed new themed projects, worked with charities, and he was always downstairs in his studio, experimenting.

Pete Townshend makes your typical workaholic look like a slacker. I was utterly amazed at how many different projects the man could handle at the same time, and do them all remarkably well.

“Who I Am” isn’t just about work. Townshend takes us inside his long marriage to Kathy, and his joy in raising three children. We feel his heartbreak as his marriage falls apart, and he tries and fails to find true love again (ultimately, he does). He takes us on the road with The Who, through triumphs and bombs.

During his life, he lost some close friends. For years, Townshend watched Who drummer Keith Moon spiral deep into alcoholism; he was saddened but not surprised when he got the call that Moon had died. Townshend was crushed when bassist John Entwistle died while the band was on tour.

It was just Townshend and Roger Daltrey left from the original who. Pete Townshend speaks lovingly of Daltrey. They are like brothers who are close, but still have the odd spat.

Through all of the frenetic work, all of the projects, the songs, the tours, the musical experimentation, the one thing missing from Townshend’s life was true happiness. He was wealthy and famous, with a healthy family, but still he was driven to do more and more.

“Who Am I” was written by an older, contented, happy Pete Townshend. He is, as he puts it, “near three score and ten” years old, and he wears it well. He and his beloved make music, both alone and together, just for the sheer joy of it. Townshend is still busy with The Who and other projects, especially his charity work on behalf of cancer research, abused children, and many other worthy causes.

Today, after all these years, the payoff is this: Pete Townshend has finally learned how to be Pete Townshend. Is that enough for him?

B.A. in Literature, Minor in Film Theory and Criticism, thus meaning all I’m trained is to write blog posts here. Neptune is my favorite planet–it vents methane into the solar system like my brother does. I think Chicken McNuggets look like Pennsylvania, Illinois, and Indiana. There are times when I’m medicated, which is why I wrote about McNuggets. Buy some today and tell me I’m wrong! Anyway, Beyond that: mammal, Floridian, biped.Good Night, and Good Luck. Besos, tom
View all posts by tom →
This entry was posted in Books, Memoir or Biography. Bookmark the permalink.