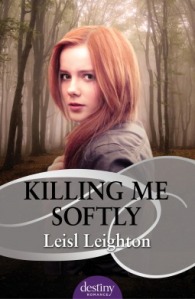 “Killing Me Softly” is the perfect title for this book. The next phrase in Roberta Flack’s legendary 1970’s hit is “…with his song.” The title works wonderfully on two levels. First, the novel brings together two musicians—a mysterious producer and one of the world’s biggest rock stars. Lovely producer AJ Denholm finds that the band Sidhe’s lead singer, Daemon Flagherty, causes her some serious inner stirrings when he’s strumming her face with his fingers.

Also, somebody plans on killing her very soon.

A lunatic been sending letters over the years announcing his plans. This sets up a well-executed mystery to go along with all the illicit stirrings and passionate kisses and stuff (fear not, romance fans: there are plenty of stirrings, kisses, and healthy dollops of stuff).

We first meet Daemon and his Sidhe mates as they watch a music awards show. Sidhe gets completely shut-out, while AJ Denholm’s latest project wins seven awards. Daemon decides Sidhe needs to work with “him.” AJ Denholm, you see, is a recluse, and nobody seems to know anything about “him.”

Craig, one of Sidhe’s members, happens to have a brother who dated AJ’s sister. Naturally, the other band members are shocked to learn that this production genius is a woman. No matter. Craig makes a call, and AJ agrees to work with Sidhe, under the provision that they stay in the guest house on her sprawling English country estate, and record in her studio. They agree.

We learn that AJ Denholm’s real name is Alexia “Lexi” Deningham. Lexi refuses to leave her estate, because she’s only just brought her twin sister, Catriona (“Cat”), home from the hospital. Eleven years ago, Cat was subjected to a brutal rape and attempted murder, and she’s been catatonic ever since. Lexi feels duty-bound to help with her sister’s care and recovery; she’s also certain that the savage attack had been meant for her—AJ—and not for her sister. The guilt has hollowed her out emotionally.

So when she meets Daemon, whose exudes charm and animal magnetism, she finds herself instantly repulsed (interested). She finds him intrusive (intriguing), and just wants him to leave her alone (mount her).

One reason this novel works so well is the backstory. We learn fairly early what happened in Lexi’s past, but author Leisl Leighton signals that something haunts Daemon as well, something truly dark.

After the band arrives, the letters become even more frequent and more raging in their hatred. Despite the manor’s remote location—despite all the extra security Lexi’s employed—somehow this lunatic has gotten on to her property. When a local girl turns up dead, and another is nearly killed, things are coming to a very grisly climax; for Daemon and Lexi, it’s just a bad time to fall in love.

I really enjoyed “Killing Me Softly.” I’ve worked in and around the music business most of my adult life, and I like the technical details and the way Leisl Leighton presents the band dynamic.

The romance is deftly handled as well. Daemon and Lexi do NOT get off on the right foot. They misread each other’s signals, and take every opportunity to say the wrong thing; they are two very badly damaged people learning to trust—and love—each other. It’s not an easy road. I liked that Daemon couldn’t just melt Lexi’s panties off with one blast of his sexy blue eyes. That would be cliché.

There were other moments in “Killing Me Softly” that could have been cliché. I dreaded them. I knew exactly how one cliché was going to unfold—and thank the book gods, I was wrong. Then there was the identity of the psycho threatening Lexi. I figured out who he was early on—I was wrong, again. Then I knew exactly how the hokey epilogue would turn out—strike three.

Good on you, Leisl Leighton!

“Killing Me Softly” is a fast read, and a fun one. There are plenty of lighthearted moments and joking around amidst the various pressures of budding romance, producing a cd, and a madman threatening to torture-murder Alexia.

I also liked the way the author fleshed-out some of the ancillary characters. It presented a depth beyond “when will Daemon and Lexi finally get nekkid.” We see that Lexi has created a sort of family around her, while Daemon has done the same thing with Sidhe. It invests the reader more in the story, moving us more deeply when something happens.

Okay. I just used “moving…more deeply” in reviewing a romance novel. I must have written too much (and I almost used “analyzing” instead of “reviewing” in that sentence).

Take two. My final words are thus: I enjoyed “Killing Me Softly” immensely. It’s a balanced mix of romance and mystery, and a nice character study as well. I look forward to Leisl Leighton’s next novel.

(nb: I received an Advance Review Copy of this book from the publisher via NetGalley)

B.A. in Literature, Minor in Film Theory and Criticism, thus meaning all I’m trained is to write blog posts here. Neptune is my favorite planet–it vents methane into the solar system like my brother does. I think Chicken McNuggets look like Pennsylvania, Illinois, and Indiana. There are times when I’m medicated, which is why I wrote about McNuggets. Buy some today and tell me I’m wrong! Anyway, Beyond that: mammal, Floridian, biped.Good Night, and Good Luck. Besos, tom
View all posts by tom →
This entry was posted in Books, Mysteries/Thrillers, Romance, Young Adult. Bookmark the permalink.