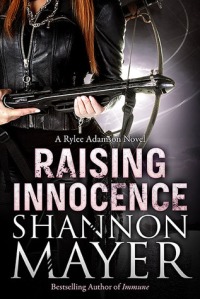 Shannon Mayer’s Rylee Adamson series is like any other really good paranormal series in the same way that a Formula One car is like a Prius: they’re both good for what they are, but one is a hell of a lot more exciting to watch.

Rylee Adamson is the Formula One of heroines, and “Raising Innocence” finds her—and Mayer—in top form.

Rylee Adamson is back in North Dakota, training, wishing she could help her lover-turned-werewolf, Liam O’Shea, and taking care of her ailing mentor, Giselle. Her former best-friend/semi-sister stops by for an unpleasant visit. Then Rylee finds herself visited by O’Shea’s boss, begging her to solve a string of missing children cases. She reluctantly agrees. By the way. The cases are in England.

There is one bright spot, though: another Tracker is in a London hospital. Finally, Rylee may be able to get her questions answered, not to mention the training she needs.

So Rylee and her loyal, goofy half-changed werewolf, Alex, are off across the pond, as they say, ready to help. Rylee soon finds that the British equivalent of the FBI’s paranormal squad is just as stodgy and unhelpful as their American counterparts.

Departmental interference is the least of Rylee’s problems. She has no problem tracking the missing children. The problem is, they keep moving. Whoever has them is able to move through The Veil at will. Worse still, that “whoever” has a shit-ton of zombies ready to attack Rylee at every turn. Add to that an unwanted appearance by the suave vampire, Faris, some pissed-off Druids, and yet another supernatural orphan to go along with Alex and the harpy, Eve, and Rylee more than has her hands full.

This could be my favorite novel in the Rylee Adamson series thus far. What Ms. Mayer does so well is pare away all useless information and extraneous subplot threads. She does this without skimping on the basics—we get a great feel for settings and, especially, action. Also, Ms. Mayer has found a way to create well-drawn characters, without feeling the need to provide complete family trees, school transcripts, and immunization records.

In short, these novels—like Rylee—are lean and strong, and they pack one hell of a punch.

B.A. in Literature, Minor in Film Theory and Criticism, thus meaning all I’m trained is to write blog posts here. Neptune is my favorite planet–it vents methane into the solar system like my brother does. I think Chicken McNuggets look like Pennsylvania, Illinois, and Indiana. There are times when I’m medicated, which is why I wrote about McNuggets. Buy some today and tell me I’m wrong! Anyway, Beyond that: mammal, Floridian, biped.Good Night, and Good Luck. Besos, tom
View all posts by tom →
This entry was posted in Books, General Fiction, Paranormal, series. Bookmark the permalink.