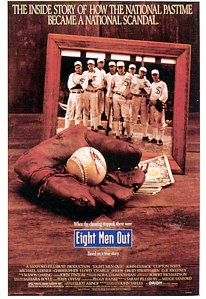 One of my favorite scenes in “Eight Men Out” comes near the final act. The baseball owners—all of whom have figured out that the 1919 World Series was fixed—have selected Judge Kennesaw Mountain Landis to be the new Baseball Commissioner, a man with unlimited power and a contract for life. The guy cast to play Landis—John Anderson—looks just like Judge Landis, a craggy, granite face, with an unruly shock of white hair, and a general countenance that says, “do NOT mess with me, young man.”

The reason this scene pleases me so much is that it’s the punch the Black Sox never saw coming.

The Black Sox Scandal is fairly straightforward. The Chicago White Sox were easily the best team in baseball during the 1919 season, and they were a lock to win the series. Gamblers paid-off eight members of the White Sox, who agreed to throw the series, thus allowing gamblers to win fortunes by betting on the hapless Cincinnati Reds.

Most of “Eight Men Out” focuses on the relationship between the players and the gamblers as the series progresses. As unlikely as it seemed, Chicago ace Eddie Cicotte was in on the fix. The sign to the gamblers that the fix was on was simple: Cicotte would hit the first batter. He did.

Some of the players were so incredibly obvious in their half-assedness that sportswriters caught on to the ruse. It’s something they knew, but couldn’t write about, for there was no proof.

Eventually, after the series, a grand jury was convened, and the eight Black Sox were put on trial. Somehow—gasp—their signed confessions had disappeared, and they were acquitted. Afterward, we cut between the relieved players celebrating while the ever-somber Judge Landis bans them from ever playing Major League Baseball again.

The actors all did excellent jobs mimicking baseball players. John Cusack shone as third baseman Buck Weaver. He and David Strathairn as Eddie Cicotte were the “good” Black Sox. The sleazy player who got them into this mess is the always menacing Michael Rooker.

The casting and direction are both good, and the baseball and period details are fun to watch. Still, for the sheer enormity of the act—gamblers paying players to throw the World Series, this in a time when baseball was really the American Pastime—there wasn’t a lot of dramatic tension. There was sort of a “well, this happened” feel to the film. God knows we didn’t need exploding light towers like at the end of “The Natural” (there WERE no lights at ballparks back then), nor did we need melodramatic overstatement.

It just seemed like there should have been something more to connect us with the players, to put us in the fans’ seats and make us feel their disappointment. As it is, it’s basically Law & Order at the ballpark. We see the crime, the investigation, and the trial. Just without the “thung-thung” between scenes.

The best baseball movies evoke something special in me. God knows, I’ve seen “Field of Dreams” 20 times, and I still tear-up in at least three or four places (Burt Lancaster stepping across the barrier, James Earl Jones’s “People Will Come, Ray” soliloquy, e.g.). I feel similar depth-of-emotion with “Pride of the Yankees,” or even “Bull Durham.” “Major League” was a comedic baseball movie, and I thought it was awesomely funny (Charlie Sheen, a former college ballplayer, stars in both “Major League” and “Eight Men Out”).

“Eight Men Out” is a good film. It’s well acted and directed, like a lot of films. If it were a baseball player, though, I doubt it would make it beyond AAA ball.

B.A. in Literature, Minor in Film Theory and Criticism, thus meaning all I’m trained is to write blog posts here. Neptune is my favorite planet–it vents methane into the solar system like my brother does. I think Chicken McNuggets look like Pennsylvania, Illinois, and Indiana. There are times when I’m medicated, which is why I wrote about McNuggets. Buy some today and tell me I’m wrong! Anyway, Beyond that: mammal, Floridian, biped.Good Night, and Good Luck. Besos, tom
View all posts by tom →
This entry was posted in Based on a True Story, Films, Period Picture ("Costume Drama"). Bookmark the permalink.