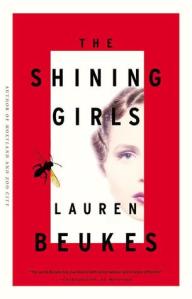 It’s 1931 Chicago, and like so many Americans during the Great Depression, Harper Curtis has it rough. Harper lives in one of the many “Hoovervilles,” small villages of tarpaper shacks and tents where those with nowhere else to go try and live.

Harper breaks his ankle in a scuffle. The cold is bitter, and Harper steals a coat from a blind woman. In its pocket is The Key. He feels new energy. The Key is guiding him to The House. The House wants Harper there. The House will reward him, and give Harper his mission.

That mission is to kill young women.

It’s 1989, and Kirby Mazrachi is one of those young women. She’s found near the Chicago waterfront, sliced open, holding her dead dog in her arms. Tokyo, Kirby’s dog, had attacked Harper while he worked on Kirby. She carries him as best she can while trying to hold her intestines inside.

Kirby is the one who survives, and she turns out to be the worst mistake Harper ever makes.

By 1992, Kirby has her scars—physical and emotional—but she’s matured into an intelligent, inquisitive college student working an internship at the Chicago Sun-Times. She wanted to work the crime beat. Instead, she got sports. Specifically, she’s asked to be assigned to a grumpy sportswriter named Dan Velasquez, who covered crime for years before burnout set in, and now he follows the Cubs around the country. As if the Cubs’ mediocrity wasn’t depressing enough, now he has this punky little intern he didn’t want, an intern whose near-murder he covered.

Kirby doesn’t know anything about baseball, but she has good instincts as a reporter. Dan sends her into the locker room after a game, and Kirby comes back with some great quotes. Not from traditional interviews, but from getting into a poker game with Cubs players, winning $20 in the process.

She’s different, but she’s sharp. Dan has to admit that. So when Kirby starts researching murders similar to hers, he finds himself grudgingly serving as mentor. During her research through the Sun-Times’ archives, there’s one murder in particular has Kirby’s senses twitching. It was the 1943 murder of an African-American woman who worked in a shipyard. Her body was carved up the same way as Kirby’s. Found among her belongings was a Jackie Robinson baseball card. The problem is, Jackie Robinson didn’t play in the majors till 1947.

Other oddities crop up. It seems impossible, but could there be a serial killer who could move through time?

All too soon, Kirby finds herself trapped inside The House, and she finds the answer to that question.

“The Shining Girls” simply, well, shines. There are so many things that could go wrong with this book—so many plot holes that could arise and sabotage the story—and author Lauren Beukes avoids them all. Her style is spare. Chapters are told from different characters’ perspective, with the date noted on each, and none of them run too long. We don’t get bogged down with any single killing, nor are we in any given year for an extended period. The effect works in two ways. One, it’s subliminally discomforting—we can’t get too comfortable in 1992, because in three pages, we could be in 1943. The other, more impressive result is that we see how the different lives here run through time. Kirby and Dan’s stories are linear; basically, February turns into March, Spring Training in Arizona to the regular season at Wrigley. Time moves normally. While these two are moving forward from day to day—their friendship evolving apace—Harper bounces all over the place.

These details must have been daunting for Lauren Beukes to juggle and still keep “The Shining Girls” on track. She writes with confidence and skill, and makes the blended elements seem effortless. The book starts us off in a creepy situation, with Harper meeting a young girl. We know something is wrong. That feeling nags constantly throughout “The Shining Girls.” Even in the lighthearted moments with Dan and Kirby, we still know Harper is out there, violent and free.

Lauren Beukes has taken a murder mystery and a time travel story—each a genre tough enough to write on its own—and blended them together seamlessly. The whole truly is greater than the sum of its parts, and I can’t recommend “The Shining Girls” enough.
Most Highly Recommended

(nb: I received an Advance Review Copy of this book from the publisher via NetGalley)

B.A. in Literature, Minor in Film Theory and Criticism, thus meaning all I’m trained is to write blog posts here. Neptune is my favorite planet–it vents methane into the solar system like my brother does. I think Chicken McNuggets look like Pennsylvania, Illinois, and Indiana. There are times when I’m medicated, which is why I wrote about McNuggets. Buy some today and tell me I’m wrong! Anyway, Beyond that: mammal, Floridian, biped.Good Night, and Good Luck. Besos, tom
View all posts by tom →
This entry was posted in Best Books of the Year, Books, General Fiction, Mysteries/Thrillers, Paranormal and tagged booksandmoviesandcrap.com, Lauren Beukes, The Shining Girls. Bookmark the permalink.