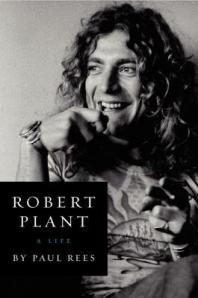 (nb: I received an Advance Review Copy of this book from the publisher via Edelweiss)

If there’s one artist ever to have epitomized The Rock God, it has to be Robert Plant. His bared chest and waving mane of long blond curls, combined with powerful charisma and that unmistakable bluesy wail, made damned sure every eye in the house was focused on him. As Rock’s Golden God, Plant prowled the stage as front-man for Led Zeppelin, the rock band who owned the 1970’s.

To me, it seems like Led Zeppelin was around forever, but they really only played together twelve years, from 1968 to 1980. For the 1970’s, though, there was nobody bigger, nobody more dangerous than Led Zeppelin, and Robert Plant was in the spotlight, always in the spotlight. When the band first started, it was guitarist Jimmy Page’s project—he was the producer and arranger, the seasoned vet who’d played in The Yardbirds. As Zeppelin recorded and toured in the 1970’s, Robert Plant began to take more control as Page fell back into a self-imposed isolation. Plant was garrulous and enjoyed attention. Page retreated into perpetually dark hotel rooms.

In 1980, Led Zeppelin broke up following the death of drummer John Bonham. The press release said they couldn’t imagine playing without their dear friend, and thus they were dissolving the band. And that was that.

Led Zeppelin ended, but that wasn’t the end for Robert Plant. Plant didn’t want to stop making music. The key for him was always the next album to make, the next style to embrace. He moved on through a series of solo projects, some hugely successful, others hugely not.

That’s the greatest thing I learned in Paul Rees’s new biography, “Robert Plant: A Life.” There were (and still are) hugely lucrative offers for Led Zeppelin reunion tours. Plant didn’t want to go back. For him, his journey was about moving forward, following the music. He has played sold-out arena tours supporting his solo projects, and he has played in tiny Arctic villages. He’s done everything from pop standards to African-tinged blues to American roots music.

Author Paul Rees is a former editor of Q magazine–a sort of edgier British Rolling Stone–and he has created a wonderful history of the enigmatic Plant. If you’ve ever seen film of Led Zeppelin performing, you know Robert Plant didn’t lack self-confidence. That continues today.

In fact, that’s really what keeps him from doing Led Zeppelin reunion tours—tours that would earn him unimaginable fortunes. Led Zeppelin was his past, and Plant has always felt a constant need to move forward, to embrace new sounds.

Rees draws us into life with Robert Plant. During his Q days, Rees and Plant spoke several times, both in formal interviews and just running into each other at various events. Rees draws from these conversations, interviews with Plant’s former friends and colleagues, and various other resources to show us this enigmatic artist. He takes us along with Plant to exotic ports and desert oases, searching for the next sound, and he shows us Robert as father, husband, and friend, a man whose career sometimes conflicts with his familial responsibilities.

“Robert Plant: A Life” is excellent book about a complex man.

In December, 2012, Led Zeppelin was awarded the Kennedy Center Honors. The last musical performance of their induction tribute was an amazing version of “Stairway to Heaven” featuring Ann Wilson from Heart singing, ace musicians, an orchestra, and a huge gospel choir. It was captivating. The camera caught Robert Plant wiping away a tear. In a shot a minute or so later, he looks gratified, but ready to ramble on.

B.A. in Literature, Minor in Film Theory and Criticism, thus meaning all I’m trained is to write blog posts here. Neptune is my favorite planet–it vents methane into the solar system like my brother does. I think Chicken McNuggets look like Pennsylvania, Illinois, and Indiana. There are times when I’m medicated, which is why I wrote about McNuggets. Buy some today and tell me I’m wrong! Anyway, Beyond that: mammal, Floridian, biped.Good Night, and Good Luck. Besos, tom
View all posts by tom →
This entry was posted in Books, Memoir or Biography. Bookmark the permalink.