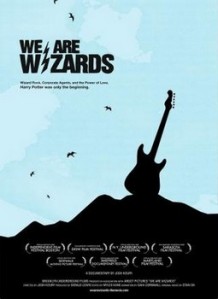 You might remember that a  few years ago, there was a series of books featuring Harry Potter and his friends, who were all witches and wizards, and even though Harry failed every class he was in pretty much, they kept him there, because he was supposed to kill Voldemort, who was the supreme bad wizard of all time—the devil incarnate—and he’d killed Harry’s parents, and took a shot at Harry, but it didn’t work—there was this reaction, and some part of Voldemort was lost, and Harry got this lightning bolt scar on his forehead, which people thought was cool, and Harry turned out to be a great quidditch player, too, until he and his BFF Ron lost their house—Grryfindor—250 points for beating the shit out of Draco Malfoy, who was just weird and into the dark arts, but Harry and Ron were personae non grata for a while, until they and their friend-girl, Hermione Granger, went through a bunch of traps to find the Sorceror’s stone, which could make you rich and immortal, although neither Ron nor Harry noticed that Hermione was hot as balls, and they should have let Professor Quirreel—the nervous one with Voldemort on the back of his head, take the damned stone, and be in Professor McGonnagil’s room, trying to get a piece of Hermione—smart, hot, cool under pressure, what’s not to love, right?—but no, the asexual Harry gets the stone, and ends up in Madame Pomfrey’s hospital for three weeks, where even DUMBLEDORE, the great good wizard, comes to check on Harry…

That’s a 280 word sentence about Harry Potter, an example of the book series that seemed to go on forever (And I’ve read them all at least twice, so I’m not bein’ a hater).

“We Are Wizards” took me by surprise. It’s a serious, yet light-hearted movie (remember: we’re talking about magic here). There was a lady talking about how the Harry Potter series would lead children into e-ville and—I swear this is true—body piercing.

The main focus of “We Are Wizards” was on music inspired by the movie. Most of it is terrible, an unconscionable assault on the ears, but most of it is supposed to be that way.

One guy wrote his own dialog to the first film, and reads it with the sound turned down. It’s funny, with a few more f-bombs than the Potter series, which had none.

A girl runs a fan site, and Warner Brothers tells her to take it down, or else. She got pissed. There are few animals more petulant than a pissed-off teenaged girl. On her fansite, she asked that her readers boycott Warner’s Harry Potter products.The books were okay, but figurines, you name it, everyone on earth stopped buying them

“We Are Wizards” is a neat movie. I was expecting a fan film where people show up in Harry Potter costumes and sing the Hogwarts theme song. Thank God, this was not that kind of film. Otherwise, I’d have avada kedavra me some punks.

Grade B+ (I didn’t find any MPAA rating, but I’m sure it’d be an R—lots of naughty, naughty language; thing is, if your kid can handle the word “fuck” without turning into a psychopath, he might enjoy the film; your call; on HuluPlus streaming)

B.A. in Literature, Minor in Film Theory and Criticism, thus meaning all I’m trained is to write blog posts here. Neptune is my favorite planet–it vents methane into the solar system like my brother does. I think Chicken McNuggets look like Pennsylvania, Illinois, and Indiana. There are times when I’m medicated, which is why I wrote about McNuggets. Buy some today and tell me I’m wrong! Anyway, Beyond that: mammal, Floridian, biped.Good Night, and Good Luck. Besos, tom
View all posts by tom →
This entry was posted in Documentaries, Films, Films Watched in 2014. Bookmark the permalink.