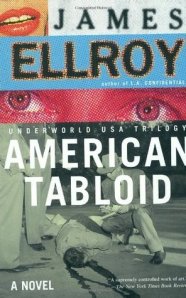 Howard Hughes is not a fictional character, obviously. Nor are Jimmy
Hoffa and the very real mafia. Best of all, Boyd, Littel, and Bondurant team up with the mafia, militant Cubans, and KKK members to set up Bay of Pigs, then after JFK calls off the second airstrike, anti-Kennedy vitriol explodes in the criminal underworld.

“American Tabloid” is a mash-up of these disparate groups of characters. We feel like we’re in the Carlysle with the Kennedys, or in an FBI listening post hearing real mobsters. Sometimes, this type of novel fails, because the author calls attention to it: “Jake walked into the room where the real President John F. Kennedy, who served from…”

“American Tabloid” is seamless. Boyd and Jack are both rather oversexed. Littel had an apostasy about RFK, and went from huge fan to mortal enemy.

Along the way, “Tabloid” provides vivid crimes, drug importing, covert CIA murders, true icepick through the eyeball stuff. It’s the kind of book that will make you want to take a really long shower after you read it, and immature or queasy readers should pick something else.

But this grim, grimy ride is probably my second or third favorite book ever, and I’ve read it at least ten times.

I’ve taken a lot of showers.

B.A. in Literature, Minor in Film Theory and Criticism, thus meaning all I’m trained is to write blog posts here. Neptune is my favorite planet–it vents methane into the solar system like my brother does. I think Chicken McNuggets look like Pennsylvania, Illinois, and Indiana. There are times when I’m medicated, which is why I wrote about McNuggets. Buy some today and tell me I’m wrong! Anyway, Beyond that: mammal, Floridian, biped.Good Night, and Good Luck. Besos, tom
View all posts by tom →
This entry was posted in Books, Books Read in 2014, General Fiction, Literary or Genre Fiction, Mysteries/Thrillers, series and tagged American Tabloid, booksandmoviesandcrap.com, James Ellroy. Bookmark the permalink.